Are You the Gatekeeper?

I ran across this in my twitter feed yesterday: 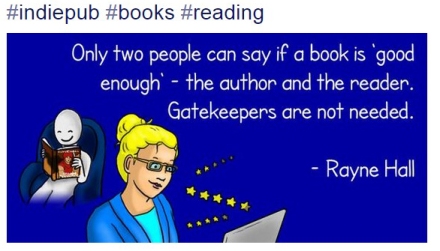 For my love of writing, I tend to follow back authors who follow me. It’s just decent to do so. Many of them are self-published, especially on Amazon. I sympathize with their plight and their aim. Get their books published and be a writer only someday.

But this sentiment I cannot abide. I’m sorry.

I will read between 30-40 books this year. I always strive for 50, but because of my schedule, I don’t think I’ve hit that many read since before the wife and I began procreating.

The most recent number I could find revealed that in 2012, there were 391,000 new self-published eBook titles released.

Self-publishing is still on the rise due to the relative technological ease of doing so. So even if it only increased 10% a year since then, that means that in the subsequent 2.5 years, there have been roughly a 1.2 million more titles released. That’s a total of 1.6 million titles since January 1, 2012. It’s probably more than that.

So if I were to take this meme literally, in order to find the 100 titles I would like to read, I would have to gamble my way through 1.6 million books to find those particular books.

Now it’s true that my choices of genre and subgenre will whittle that down significantly. My particular likes are fantasy, horror, history (non-fiction), science, philosophy, and so on. So maybe I could get that total pool down to 160,000 titles.

I don’t know about you, but I don’t have the time or inclination to burrow my way through hundreds of thousands of nondescript titles with mostly home-rendered cover art in the scant hope of finding that one title of enough quality to make my search worthwhile.

I mean, if a close writer-friend of mine self-published a kewl eBook, I’m buying that shit right now. And I’m reading every word. And I’ll love it, even if it should suck (which fortunately, it doesn’t, especially if you like snark.) But I don’t know these other 100,000 people. And because I have specific reading I really want to do, and a little bit I need to do, I’m not going to give every self-published author that follows me on twitter a book’s worth of my time to give them a chance. I just don’t have that kind of time.

So you know what I do? I rely on gatekeepers. Those gatekeepers of publishing who’ve kept me reading relatively enjoyable and informative works for decades now. If a book has gotten through that gauntlet as well as garnered some reviews I can rely on to give me a good estimation of what to expect in both content and quality, then I’m going to buy it, and I’m going to happily pay extra for the privilege.

I don’t care if I’m paying $10.99 vs. $1.99. I value my time too much. That 350 page book might take me a good chunk of my spare time for 3-7 days. You bet your ass that kind of time is worth way more than the $9.00 differential you’re offering me to gamble that your book was one of the ones they were wrong about, that they just missed.

Every now and then one will rise to the top and a publisher will snap it up and republish it through separate channels. Take The Ark by Boyd Morrison. It was serviceable at best. Interesting plot (with one HUGE hole,) workaday writing, and cardboard characters. Okay for thriller pap, but I won’t buy his next.

And that’s the pinnacle. That’s the big example. If I have to troll through hundreds or even thousands of titles with that as the best on offer…?

And I have to admit that I find it cloying and disingenuous the way the self-published writer community has co-opted the term “Indie.” It’s a pretty transparent attempt to shift perception by intimating that their independent state was an artistic choice they made rather than their only option in the wake of consistent rejection from agents and publishing companies. Calling oneself a “self-published author” carried with it a well-earned stigma, coming to pretty much equate to “poor quality.” So they sought to escape that stigma by changing the terminology rather than changing the quality.

Indie filmmakers and Indie musicians primarily became so in order to escape the restrictions of the studio system, to push typical boundaries to create groundbreaking artwork that challenged conventional norms.

Unfortunately the only boundary that’s challenged by at least 90% of self-published writing is the quality boundary.

That’s alright. I can write my own dreck.

If you’re an “Indie Author” and you’re taking offense to this, I would like to apologize, but I can’t. I need my gatekeepers.

Yes, I know that even J.K. Rowling was rejected a number of times before becoming the global success that she is. If you’re the very, very rare “Indie Author” whose very good work has to this point been overlooked, I really am sorry that I don’t have the time to wade through the other hundred thousand authors who think the exact same thing of themselves, but aren’t actually right about it like you are. I truly am. And I truly hope that, like Boyd Morrison, you get discovered so that my gatekeepers hold you up as an example of one that almost got by them so I can enjoy your work.

If you, like me, are an aspiring writer who to this point hasn’t gotten past the gatekeepers, I would urge you to keep trying. Improve your writing. Submit again and again. Don’t fall to the temptation of the wide and easy path. I would be willing to be that some of those who are now churning out material that won’t pass muster with publishers are talented enough to get good enough to eventually publish, but lack the patience and discipline to get there. I suspect they are more in love with seeing a book cover with their name on it, an Amazon listing with their book title on it, the kind of ad copy they wish a publisher was providing for them, than they are with finishing a quality novel. That’s a loss not only for them, but also for us who might have had something to truly enjoy had they allowed their work and their ability to be tempered by the fire of rejection.

Now if, like my friend mentioned above, you write subversive and interesting short stories and poetry that would struggle to find an audience no matter how good they are, then go Indie, please. Quality does not always equal commercially mass-marketable.

But, sad to say, you’re going to struggle to be seen amidst the other 400,000-ish books that are completely clogging the virtual bookshelves.

If only there was somebody to help all of us sort out the wheat from the chaff, as imperfect as their efforts might be.

Oh, right, there is. Some call them Gatekeepers.

An aspiring playwright/screenwriter, ex-Christian Humanist who has a few things to say now and then :)
View all posts by Anthony →
This entry was posted in Uncategorized. Bookmark the permalink.

4 Responses to Are You the Gatekeeper?